I suppose it happens to every homebrewer at some point, you go buy a bunch of ingredients for a specific beer, with all the care and planning you usually do, but at some point it sits in your grain storage, and is forgotten about completely. Well, in this case not completely… I knew I needed to brew it, but at no point did I think to write down what the recipe was, or any details about it. So, I’m kind of just feeling it out today. Which is fine, considering I practice brew-zen, (go ahead and laugh, we do!) and know enough at this point, to say… not totally miss my mash target temp or something. 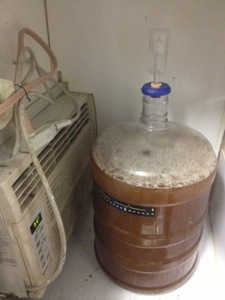 When it comes to Saison I’m a bit of a  purist. I love DuPont, but in general I’m highly suspicious the recent trend of soft, vaguely flavored Saisons. These tend to use the easier to work with (though quite inferior) French yeast strain, and often claim to be “artisinal” and/or “farmhouse”. I can guarantee you won’t find a farm anywhere near any of them. Mostly it seems like brewers want to make “artisinal” (I loathe that word) beers, but are scared to death of wild yeast. Like most compromises, everyone loses.

Due to this I’ve had no interest at all in the style. The more I learn about it’s wild beginnings the less interested I am in it’s neutered BJCP bludgeoned current form. However, recently I began thinking of making a beer that honored that wilder tradition of Saison, by using 100% “spontaneous” yeast. I put that word in quotes, because it’s not like a pumped this beer up onto my koelschip or something. It happens to be that I saved some yeast from our last batch of spontaneously fermented apple cider (unpasteurized cider, left to ferment using only the yeast and bacteria the apples contain). It seemed to me, that this yeast had a profile close enough to what one expects from a Saison, and yet, it was totally wild, and natural, and straight from the farm. Whether or not this will seem true to most people’s sensory assessment of a Saision is anyone’s guess, but I for one can’t wait to taste it.

So, from process of elimination, it seems like my recipe is based on the one Seanywonton details here:

Of course, I substituted essentially the whole malt bill, but hey, DuPont is a single malt bill after all, so why fuss over the details. Seems like the basics are a pale malt bill, and from there out it’s all about treatment.Speaking of which, I’m doing a full 2 hour boil for this. Traditionally this would have probably been a 4 hour boil (or more). I doubt they had darker malts laying around, and if they did, they were likely expensive, so probably weren’t used for these beers. Like the Brits, I’m sure they just boiled the living hell out of everything and it caramelized naturally. I’m doing it not because darker malts aren’t available, but because in my experience a long boil makes a far better beer in general. (The best IPA I’ve ever made was 5% and had a 3 hour boil, for instance.)

This beer has been bubbling away in my fermentation chamber for a couple weeks now, and showing no real signs of letting up. Once the primary ferment dies down, I’ll take it out of the chamber and let the pellicle form. We’ll see how it goes, but It will be at least 6 months before this is ready I think. The airlock smells spectacular though, spicy, fruity, and stinky. Can’t wait til it’s ready!